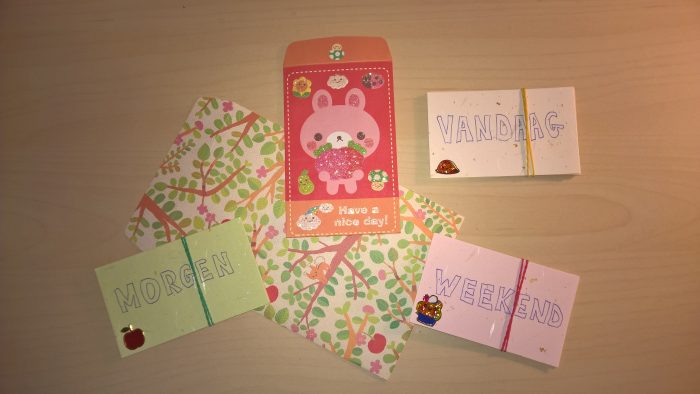 Problem
In Tokyo I met a Danish guy at Startup Weekend Tokyo who told me about his friend playing a communication game with his kid. Once a week, he and his family would sit together to discuss the week’s challenges, and give each other tips on how to tackle issues. The parents did this to develop their kids’ communication skills.

Solution
I thought it would a great idea to create a card game for parents and kids (age range of 4-7 years old), so that more parents could play this game and give their kids a kickstart with their verbal communication.

Method
Experiment: I sent 6 friends/colleagues with kids a bunch of cards in a nice package, including some game rules, and asked them whether they wanted to play the game.

I named the game ‘Mushy’ (don’t ask me why, but at the time I had a good reason for it). I divided the questions into three categories: today, tomorrow and weekend. I came up with several questions for each group.

Time spent
Buying the material to create the cards, coming up with the questions, sending out the cards: about 2 days in total.

Results
The feedback was pretty negative lolol! From various parents I heard that the questions were too hard. Also, a parent suggested that instead of cards, I make it more fun by creating a whole toolkit with pencils and other ways to express thoughts and feelings.

Learnings
The biggest learning from this experiment: if you don’t know your target group, you need to spend time getting to know them to understand what drives them before offering a product.

I don’t know anything about kids, I don’t have ‘direct access’ to them, and I’m not too keen on having to rely on a friend for every single additional question that pops up.

Conclusion
My first experiment with kids was a failure, but I had fun being creative making the cards nonetheless. In the ‘1 dollar’ store in Tokyo you can go crazy with stickers, nice pencils and colored ‘business cards’! On to the next idea!